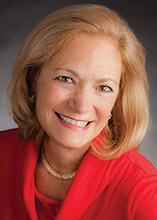 Lindy Emrich has been one of Marin’s top real estate agents for over twenty-five years. She has called Marin home since 1973. She and her husband Peter live in Dominican where they raised their three children; Michael, James, and Mallory.

Combining her background in Interior Design and International Public Relations, Lindy launched a career in Real Estate and soared to the top of her field. She has won the top sales awards from Golden Gate Sotheby’s International Realty, Alain Pinel Realtors, Pacific Union and TRI/Coldwell Banker. She has been ranked as one of the top 1% of Marin County agents and ½ of 1% internationally. Lindy has received recognition from her colleagues by receiving the “Agents Choice Award.” Due to her efforts in the community, she also received the designation of “Senior Marketing Consultant.”

Lindy’s success is based on her clients’ satisfaction and consequently their referrals. She has represented sellers of all types of properties including some of Marin’s most prestigious homes, historical estates and several Marin Designer Showcase homes.

Lindy joined forces with Golden Gate Sotheby’s International Realty in 2014. She immediately became one of their best and most admired agents. She is excited about the company’s unparalleled marketing, global reach, and outstanding reputation.

Give Lindy a call to find out how you can have one of Marin’s best agents and companies work for you.